How Scar Tissue Affects The Body 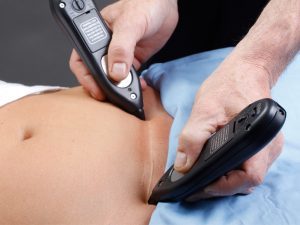 Scar tissue. It’s a necessary part of the healing process; it’s simply how skin and connective tissues come back together after some sort of injury. Whether you’ve strained or torn a muscle, had surgery, a C-section, or injured a ligament, scarring sets in as a natural and normal part of recovery. Unfortunately, that small area where the physical separation of tissue happened isn’t the only area affected.

No matter what area was injured, when the body begins to lay down new tissue, healing the gap and creating the scar, this new tissue lays differently than the original. For example, in a muscle, the fibers run in a single direction and in a clear pattern. This allows the most movement and flexibility. But as new tissue is formed during healing, it lays in multiple directions and forms a crisscross pattern. This may be the body’s way of attempting to make the area strong and add more stability, but unfortunately, it doesn’t quite do that, and this actually creates more issues.

You see, a small scar, like that from a minor cut on the skin, may heal relatively easily and have just a small amount of scar tissue that doesn’t affect much beyond the area. However, larger injuries can create some major problems as that crisscross pattern that’s formed starts to pull on other areas it shouldn’t. For example, let’s say you’ve had a knee replacement. Almost as soon as you wake up from surgery, a physical therapist will be there to mobilize your knee and get you up and walking. The entire purpose of that is to keep scar tissue at bay. During the replacement they’ve cut multiple muscles, taken out pieces of bone and screwed in metal and ceramic pieces. While necessary for many people, that’s a lot of damage to the body, so scarring goes into hyperdrive trying to heal it all. The recovery and rehabilitation process is almost entirely centered around breaking down the scar tissue that often forms from the thigh down to the lower leg. It’s not just at the incision site, but rather everywhere they damaged underneath the skin and any areas that may connect to. While that surgery that you had years ago may feel fine to you and you have full range of motion, there is also trauma associated with scars. 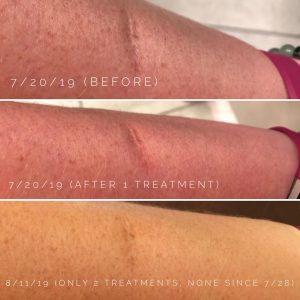 In the firstDolphin MPS course I attended, our instructor shared a story of a man who was bitten by a dog when he was a child. He had a scar from the bite as well as a crippling fear of any and all dogs. Using the Dolphin and MPS Therapy, his scar was treated and while the scar tissue didn’t revert back to its original appearance (because once a scar is there it’s there, but the appearance may be reduced), he also had a change in his feelings toward dogs. Now, he wasn’t running out to get a furry friend of his own, but he was able to be around dogs without having a panic attack. SCARS HOLD TRAUMA AND EMOTIONS!!!

If you look at the above photo that is my arm and a scar that I’ve had since 2016 after breaking up a dog fight. In my first MPS Therapy class in July 2019 I had my scar treated, and I’ve had it treated a handful (less than 5) times since then and well, I’ll let the photo speak for itself.

Scar tissue can develop into adhesions. An adhesion is simply a band of scar tissue that connects two areas of the body that otherwise wouldn’t be connected in that way. So to keep with our knee replacement example, adhesions can often form throughout the quads (front of the thigh) and up into the hip, pulling on the fascia/connective tissue and limiting range of motion. This is why we’ll often work on keeping and improving the flexibility and movement of your hip, knee, and ankle. The scar tissue and adhesions not only pull on other areas, but can also put pressure on to structures they shouldn’t. Muscles, nerves, and joints can all find themselves under intense pressure from the sudden formation of scar tissue taking up space that otherwise would leave them to move normally. This can result in a loss of range of motion, as mentioned above, as well as cause nerve compression resulting in pain, tingling, numbness, and weakness of the areas along that neural pathway.

Thankfully there’s a solution. Michigan Massage and Wellness offers MPS Therapy (Microcurrent Point Stimulation) using the Dolphin Neurostim to help reduce not only chronic pain but the fascial restrictions and adhesions that come with scar tissue.

A knee replacement is just one example; from joint replacements and muscle repairs to mastectomies and car accidents, any type of injury can result in scar tissue. It goes far deeper than the skin and can affect far more than just the injured area. If you’ve had any sort of injury or surgery and noticed a change in your range of motion, pain levels, or other symptoms after, ask us how some of our massage and bodywork services can break down the scarring and adhesions and help you get your body back.